What Are Vanilla Beans?

Vanilla Beans are the fruit of an orchid (vanilla planifolia) whose blossoms open for a few hours just one day a year (yes, that is 1 out of 365 days). Because this orchid has only one kind of bee that is its natural pollinator, pollination must be done by hand. No pollination means no Vanilla Bean.

The beans need up to ten months to mature; afterwards, they are hand-picked and cured for another six months. Curing involves sweating and drying the beans repeatedly so that they develop crystalline vanillin. It is this white substance that gives them the flavor we enjoy. So, the next time you buy Vanilla Beans, remember what it took to get them into your hands.

The Aztecs developed the curing process still used today. And, it was the Aztecs who first flavored their cocoa drink, xocolatl, with vanilla.

Vanilla Beans are one of the most expensive spices or food flavorings because it takes much time and manual labor to process, harvest and get them to market.

The best Vanilla Beans are dark brown, plump and supple, and covered with the white crystalline vanillin. Do not buy any beans that are hard and brittle. Store and reuse whole beans by washing, drying and wrapping tightly in plastic wrap. Store in a tightly sealed container (glass jar).

One inch of bean equals about one teaspoon of pure extract. 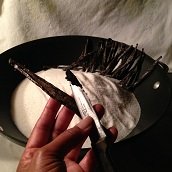 Madagascar and Reunion origin Bourbon beans, which account for 75% of world production, are used for most extracts. They are excellent for all purposes. Favor is full and robust.

Mexican bean/extract has a heavier, creamy taste with a Kaluah-like aroma. This variety has an affinity with coffee and chocolate flavored dishes. Best usage is to flavor shorter-cooking or cold-prepared foods like vanilla yogurt.

Tahitian bean/extract is sweeter with a flowery aroma. Both Tahitian and West Indian beans have lower vanillin content than Bourbon and Mexican beans, and tend to be used for purposes other than culinary (e.g., used in the perfume industry).

Indonesian Vanilla Beans may be harvested by farmers at varying times, so vanilla beans from Indonesia can vary greatly in taste (can range from deep and full-bodied to light and woody).

Because Coumarin (from Tonka tree), which is found in some inferior vanilla extracts purchased outside the USA, is an USDA-classified toxic substance; all vanilla extracts bottled and or sold in the USA cannot contain it.

Vanilla Beans Are Good for These Foods:

Vanilla beans are used in most of the world's cuisines. They are mostly associated with sweet foods; however, they can be used for savory dishes too like lobster entrees.

Beans are the most potent form of vanilla. One inch of bean (the seeds inside) equals about one teaspoon of extract.

Essence - concentrated form of vanilla extract. Only one to two drops are needed in a recipe.

Pure Vanilla Extract - also labeled on products as natural vanilla flavor. The vanilla flavor is extracted by macerating (steeping until dissolved) chopped up beans in a solution of alcohol (usually Vodka) and water, which afterwards is aged for about six months. To be considered pure single strength, the solution must contain 13.35 ounces of vanilla beans and 35% alcohol per gallon during the extraction process.

Double Strength Vanilla Extract - has twice the number of beans (26.70 ounces), and the same amount of alcohol (35%) per gallon as the single strength.

Triple Strength Vanilla Extract - has three times the number of beans (40.05 ounces), and the same amount of alcohol per gallon as the single strength.

Imitation Vanilla Extract is made up of artificial flavors and chemicals. It does not have the smooth mellow flavor as pure extract, and it can leave a bitter aftertaste. By using real vanilla, the pure extract, you can, happily, end up using about half of what you would have used of the imitation kind.

Vanilla Powder - is the whole beans dried and ground up into a powdery substance. The advantage of using the powder form of vanilla is that its flavor does not dissipate or evaporate as easily as the extract’s when heated in foods like cakes, cookies, custards, and pies.

Vanilla Flavoring - means the product contains a blend of pure and imitation vanilla.

Return to List of Spices - Herbs from Vanilla Beans

How to Make Vanilla Sugar or Vanilla Extract:

Click here for a tutorial on how to make Vanilla Sugar

Basic recipe is a ratio of one to one (1 Vanilla bean per 1 cup of sugar). Split the beans open and bury them in sugar in an airtight container. Let sit for at least one week. If you don’t mind the specks, scrape the seeds out of the bean into the sugar. You can top off the sugar using the same beans, if they are fresh, for about six months.

How to make homemade Vanilla Extract?

Basic recipe is a ratio of two or three beans to one cup of vodka, brandy, light rum or bourbon (you don't have to use your best). Split whole beans and place with alcohol in a jar sealed tightly. Keep in a cool dark place for at least six months to get the best quality. If you want homemade extract to give as December holiday gifts, make up your batch by June. If stored in a tightly-sealed bottle/jar in a cool dark place, your extract can last for several years and save you money. 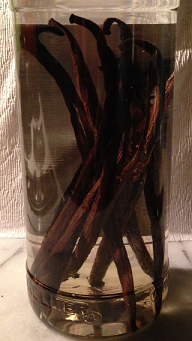 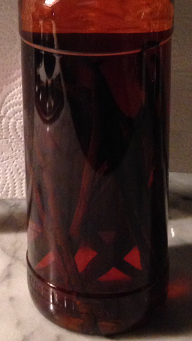