Preserved lemons are used generously with main entrees; and, the following blends are some of the main flavors used in soups, stews and tajines (North African Berber stews cooked in earthenware pots having the same name.  The pots have a cone-shaped top that collects and allows the flavored condensation to run back down to the stew thus keeping it tender and moist).  Tajines or Tagines are kind of similar to Tavvas found in Cypriot cuisine. 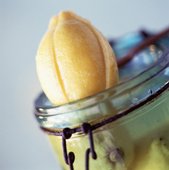 Dry-fry chilies for 3 minutes in skillet over medium heat. Add all other spices and continue to dry-fry for another 4-5 minutes. Remove from pan and allow mixture to cool to room temperature. Before grinding, remove seeds from chilies. Grind mixture to a medium-fine texture and store in an airtight container in a cool dark place. Keep for up to 6 months.

A coarse-texture Egyptian blend of coriander, sesame seeds, nuts (any or all - almonds, cashews, hazelnuts, pine nuts, pistachios) used to season vegetables and meats. Also, when mixed with olive oil Dukka can be used as a dip for foods such as bread (pita). Optional ingredients include: dried chickpeas; dried herbs like marjoram, mint, or thyme; dried lemon zest; hot pepper flakes; black pepper – freshly ground or whole peppercorns; other seeds like caraway, fennel, or nigella; and, other spices like cinnamon, clove, or turmeric. You can even add a little sugar.

Preheat oven to 320 degrees. Toast almonds and hazelnuts in oven till golden. Remove and allow to cool. Once cool, rub off the hazelnut skins and place all of the nuts into a mortar or food processor. Toast all seeds in the oven until golden. Allow to cool and combine with nuts. Grind mixture until slightly coarse and crumbly.

Delicious used as a seasoning for salads, a dip with pita bread, and sprinkled on fish.

Tunisian hot saucy blend of dried hot chilies, garlic, cumin, coriander, olive oil. Some variations include caraway seeds. Served as a condiment, and with couscous. Also used to favor soups and stews, as well as a marinade for chicken, fish and lamb.

Moroccan blend of five to six spices. With warm notes and a golden brown color, this "curry" blend is popular in Tangiers. It is used for Tagine entrees, especially chicken or lamb. It is also used to flavor soups and stews.

Dry-fry the cinnamon and peppercorns in a heavy skillet over medium heat. Grind the roasted spices to a powder and mix with the remaining spices. Store, for up to three months, in an airtight container in a cool dark place.

Return to List of Spices - Herbs from African Food Spices

[?]Subscribe To This Site
© 2011-2015 WikiSpices.com All Rights Reserved. Unauthorized Use Prohibited. Privacy Policy - Trademarks - Limited Right To Use. The information contained in this website is not a substitute for medical advice or treatment. Consultation with your doctor or health care professional is recommended.