Are From the Same Plant

What Are Coriander - Cilantro? 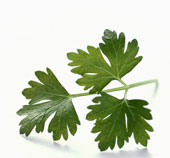 What is the Origin of Coriander - Cilantro?

Coriander - Cilantro are Good for These Foods:

Cuisines = most, if not all incorporate both Coriander and Cilantro

Coriander is an integral spice for Thuringers (German sausages) including Cervelats and Blood Sausages.

Coriander is a good spice to use with cumin. When cooking with the seeds, roast them lightly before grinding to enhance their flavor. Seeds and ground Coriander have a citrus scent and flavor; whereas the leaves, Cilantro, have an anise scent.


Return to List of Spices - Herbs from Coriander - Cilantro


Add Something About This Spice/Herb