Although a flavor additive, Salt is not a spice. It is a mineral. Most sodium is consumed in the form of sodium chloride which is the bulk of your common cooking and at-the-table salts. Since other forms of sodium are also found in pre-packaged and processed foods, you have to account for all kinds of salt and sodium.

Strive to have less than 2,300 milligrams of sodium a day (about 1 teaspoon). This includes all forms of sodium and salt (what’s in processed foods, added during cooking, and used at the table).

The two primary, and oldest, methods for producing salt is solar evaporation and rock mining.

In the oldest, the sun evaporates sea water that has been ushered into shallow ponds; afterwards, the salt is harvested and is marketed as Sea Salt. Sea salts can differ in both flavor and color because they usually contain some trace minerals and elements that are found in their water sources.

The second oldest method involves harvesting product from salt veins and domes deep in the earth. These salts include products like Himalayan Pink Salt.

A third method involves evaporation, steam heat, and vacuum pans to produce a fine-textured, additive-free salt. When iodine, a necessary trace nutrient naturally present in some other foods, and an anti-clumping agents are added, the final product is marketed as common Table Salt.

Processed and pre-packaged foods account for most of the sodium and salt consumed.

Check food labels! Sodium can be found in some products in which you least expect to find it (e.g., cold medicines).

Gourmet salts are still salt, no matter if they are believed to be "healthier" than table salt. They must be included in the tally of your daily sodium consumption. 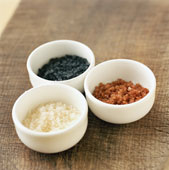 Lowering salt in your diet can lower blood pressure.

Which salt should be used when? There was once a generally-accepted guideline that:

Flake Kosher Salt should be used for cooking and making brines

Table Salt should be used for baking (its granules are uniform in size and shape, thus they won’t alter the outcome of baked goods), and as a general purpose flavor additive

Flake Kosher Salt has less sodium and weight than other salts. A basic conversion is to substitute 1 tablespoon + ¾ teaspoon for each tablespoon of common salt.

Some Names of Culinary Salts:

Get answers about food additives and ingredients.

© 2011-2015 WikiSpices.com All Rights Reserved. Unauthorized Use Prohibited. Privacy Policy - Trademarks - Limited Right To Use. The information contained in this website is not a substitute for medical advice or treatment. Consultation with your doctor or health care professional is recommended.