What is Cinnamon - Cassia?

Ceylon Cinnamon indigenous to Sri Lanka is the true cinnamon. Cassia is from a close relative plant of cinnamon. In America, Cassia is what is known and used as cinnamon.

Cinnamon - Cassia is taken from the dried inner bark of a tropical tree to form the cinnamon sticks used in cooking. Ceylon cinnamon sticks are softer than their cassia stick cousins which are hard. 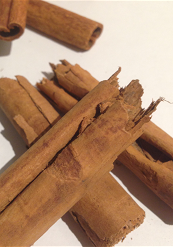 What is the Origin of Cinnamon - Cassia?

Cinnamon is indigenous to Sri Lanka, and Cassia is indigenous to Burma. There are different varieties of Cassia based on where it is grown (e.g., Vietnamese/Saigon, Indonesian, Chinese). Take time to sniff sample jars where you shop. You'll be able to smell the differences between cinnamon and all the cassia varieties.

Cinnamon - Cassia are Good for These Foods:

Cinnamon - Cassia is found in many traditional sweets, cakes and desserts, as well as many savoury dishes and spice blends like Chinese Five Spice.

Cinnamon is high in antioxidants. It is believed to be useful for improving the circulation, and has anti-inflammatory and blood thinning properties. Research shows that it may also help to lower blood sugar levels, and so may be useful in the treatment of type 2 diabetes.

Cinnamon has health boosting compounds including eugenol, which is used to relieve pain and cinnamaldehyde which has sedative properties.

Cinnamon and Cassia are common ingredients in toothpastes, mouthwashes, breath mints, and chewing gums. Return to List of Spices - Herbs from Cinnamon - Cassia